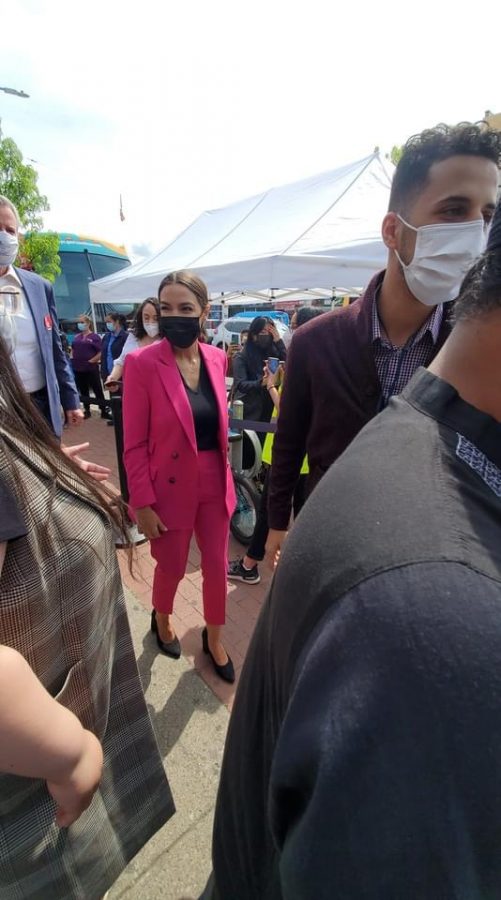 In April 2021, Mayor Bill de Blasio announced that approximately 20 vaccination buses would be scattered throughout New York City. With colorful graphics and an image of the statue of liberty wearing a band-aid, the goal of these mobile buses is to vaccinate New Yorkers and tourists.

Alissa, who also goes by the name of Meli, gives us details about the bus, patients, medical staff, her compensation, and what a typical day on a vaccination bus looks like.

She explains the recent “hiccups” she and the other employees have been encountering. Alissa was hired in April to translate for patients that spoke Spanish.

She would be onsite, and available to interpret from the moment the patient is registered, vaccinated, and observed for 15 minutes. As a linguist, Alissa provides Spanish and English consecutive interpretations and was started on a generous $50.00 an hour rate.

Shortly after, the agency reduced it to a flat rate of $250.00 a day, and overtime is no longer paid.

The job is not as simple as it sounds. There are a few days where it rains and it gets cold, the interpreters are assigned to float around between two buses depending on how busy it gets. The patient arrives at the location and gives a QR code to a “flow monitor” who is designated to register the patient.

Throughout the entire process, Alissa is next to the patient making sure the medical staff is aware if he or she has any allergies to any medications or vaccines, is under specific medication, or has any underlying condition that the medical staff need be aware of.

As soon as the patient receives their dose, vaccine record card, and medical advice, they are escorted to a second bus for observation. When Alissa started in April, the vaccination sites weren’t as busy.

That changed in a matter of weeks with the F.D.A. approving vaccinations for anyone over the age of 12.

A typical day is now three times busier. Although Alissa has enjoyed seeing her city getting vaccinated and with the hopes of the city going back to “normal” the job itself has been exhausting. Flow monitors, translators, and security guards for the site are only given 30 minutes break and work 8 to 9-hour shifts.

They are not allowed to use the bus bathrooms (those are only for nurses) which puts each employee in an awkward position of “holding it in” or begging businesses in the area to allow them to use the restroom.

Another layer of the job has been the safety issue. Alissa recently worked a shift in Jackson Heights, and the workers and translators had been on edge on that shift.

The specific area in Queens where they were stationed was crowded and had a few individuals with mental health issues and drug addictions. One man had been harassing the employees and made the workers extremely paranoid. The man would approach random individuals on the plaza and try to take their belongings.

To make matters worse there was only one security guard on site. The site manager did not allow the employees to put away their belongings in one of the buses, leaving them concerned for their wellbeing.

Days after on a warm day, Alissa was working on one of the sites in the Bronx. With just a half-hour for a lunch break and no time to use the restroom, she was starting to feel exhausted and irritable.

Moments later, Mayor Bill de Blasio along with Alexandra Ocasio Cortez showed up at the site where she was working. The mayor and AOC took plenty of photos outside and inside the buses. The site manager wanted everything to look perfect.

With other public officials visiting the site, Alissa said, “I wonder if the Mayor’s office and Ocasio-Cortez are aware of the treatment of the employees at the site.”

These mobile buses were a great idea to vaccinate as many New Yorkers as possible. They’re accessible, fast, free, and convenient. From the outside and for the opportunity of a photo-op the buses seem like a great idea.

Some of the employees have a different view.

Alissa mentions that a few of her colleagues have expressed discontent with the compensation and work conditions. Most of the flow monitors “were” Broadway actors/actresses, musicians, models, etc. They accepted a $25.00 an hour rate “because they have nothing else.”

“At this point, we all do the best that we can,” Alissa said.

As the city expands its vaccination efforts and offers tourists the chance to be inoculated, translators are exposed to speaking with individuals without social distancing and no PPE. Most translators and flow monitors bring their own face masks but neither the agency nor the bus staff provides face shields for the translators. It is meant for medical personnel only.

Because of the new virus strains and the number of tourists trying to get vaccinated, Alissa feels more susceptible to testing positive for the virus. With the buses outdoors, she often finds herself standing very close to the patient, so they can hear her interpreting. Social distancing is impossible when it comes to interpreting.

Alissa is enthusiastic about the number of vaccines that are administered on these mobile buses and the city potentially getting back to normal, but she feels that the employees deserve humane treatment.

“If the goal is to make our city healthier and safer by providing vaccines for the public, then the higher up staff should start with their employees first by giving them a simple one-hour lunch break,” said Alissa. “[We should get] face shields and PPE, more security guards, and a mobile bathroom for the translators and floor monitors, not just the nurses.”

Although Alissa has expressed this to the agency nothing has changed.

She recently developed a UTI, was severely dehydrated, and had to take a few days off. She states that although the city is making efforts to get back to normal this will still require a process. She’s experienced first-hand how her own health, pocket, and sanity have been affected by working at mobile sites.

Going forward she does not wish to continue her employment at the vaccination sites and prefers to look elsewhere.

Although she applauds the agencies that have provided these buses for providing this service to the city, she believes they should also care for and protect their own before doing so for the rest of the city.