How a Nine-Minute Video Led to a Change in America 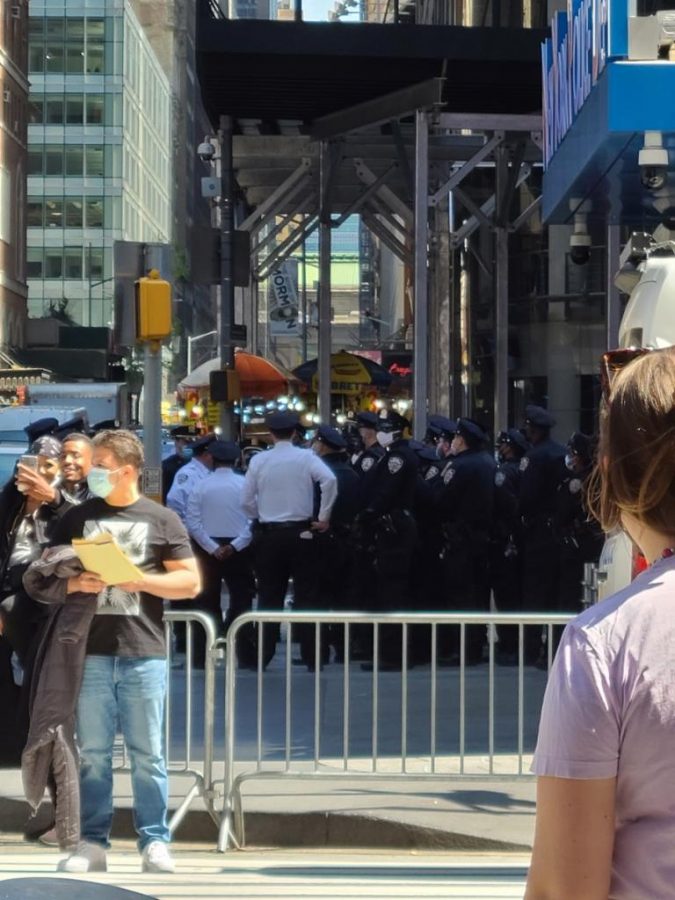 Police officers in Times Square preparing for the verdict

In 2014, these exact three words were uttered by Eric Garner, who was also killed by police enforcement. However, this time, there was accountability. This time, the now-former officer Derek Chauvin was found guilty as charged on all counts, which should cause officers to be discouraged from performing excessive uses of force and held responsible for their lack of regard for Black lives.

This sudden shift in police accountability comes after decades of struggling for justice for Black lives long before the killing of George Floyd. A struggle that has been alluded to several times throughout the trial. With names like Emmett Till being repeated by Floyd’s family, a man who was lynched in Mississippi in 1955, his killers were found not guilty, admitting they killed Till shortly after an all-White jury gave them impunity.

Even though many have rightfully said, this different and new outcome is the bare minimum of what we should expect, the significance of ‘guilty as charged’ cannot go unnoticed.

A not-guilty verdict would have not surprised many Americans, symbolized by the many prepared to hit the streets in protest.

Instead, this time, those who were ready to protest could celebrate, unlike the Rodney King case, which did not garner a guilty verdict despite ample video evidence. It signaled one of the several examples that had long led to an expectation of hearing ‘not guilty’ when officers were charged for killing or brutalizing an unarmed Black man.

Nevertheless, the feeling of relief and joy this time around should only be the beginning of what is to come in reforming the policing system in America.

That said, it took the jury only ten hours to deliberate and come to a unanimous conclusion on not one but three separate charges, finding guilt beyond a reasonable doubt, despite the wavering complexity of adjudicating multiple offenses.

Why? Because one – 9 minute and 29-second video – showing the duration of former officer Chauvin kneeling on George Floyd’s neck was so substantial that the staunch testimony of officers, experts, and bystanders became merely added shreds of evidence to Chauvin’s guilt.

The prosecution team, who successfully obtained three guilty verdicts, restated the significance of the – 9 minutes and 29 seconds – 22 times in their closing argument. Telling the jury to believe their eyes – to believe what they see – and the jury did just that.

The prosecutor, Steven Schleicher, riveted the jury to recognize the evidence that has been long represented in the video, concurrently with the body-worn cameras that played countless times throughout the trial. Having the jury and everyone watching re-visit the final moments of George Floyd’s life repeatedly.

“This case is exactly what you thought when you saw it first, when you saw that video,” Schleicher said in the prosecutions closing statement. “This wasn’t policing, this was murder.”

Moreover, as Judge Peter Cahill read off the three guilty verdicts, various individuals, including Floyd’s family, bystanders during the tragic events of last May, and others, commemorated and celebrated justice for George Floyd. They were doing so in what is now referred to as George Floyd Square, the area where George Floyd produced his last breath that would change America forever, although his death was a moment that should never have happened.

The moment of joining together in victory became the start of the new contemporary movement in American history to relieve the myriad grievances and injustices Black Americans have suffered. It is only the beginning of the long-overdue change our society has long needed and coveted.

The prosecution team led the jury to the right decision. Now the focus shifts to Congress by adapting the George Floyd Justice in Policing Act of 2020 into law. The act offers several policing reforms, such as lowering qualified immunity, the criminal intent standard, and treats discrimination as a practical matter.

The bill is growing in importance as only a short distance from George Floyd Square was Duante Wright, an unarmed Black male, shot dead by police officer Kimberly Potter around a week before the case against Chauvin concluded.

Therefore, while the verdict brought countless Black Americans solace when they heard ‘guilty,’ it would make the community’s sentiments and all of America’s far less transitory if the George Floyd Act became law.

Furthermore, becoming complacent regarding one decision that would have been open–and–shut in any other circumstance is something that cannot happen. A minimal number of officers are convicted after killing Black men and women – and the killings have not stopped.

Last May, the protests and unrest started from one video that within hours saw the entire nation pledge support for Black Lives Matter and resist the notion that the police are above the law. The verdict highlighted the start of the change, but the work now transitions to enacting laws supporting reform. We must not forget that.

Although, it also remains salient to distinguish police reform from being anti-police, distorting the two becomes problematic in achieving more guilty verdicts and preventing more loss of Black lives to police brutality. As the prosecution team made sure to attest to, the trial was not anti-police; it was pro-police.

“There’s nothing worse for good police than a bad police who doesn’t follow the rules,” Schleicher said in his closing statement. “This was not policing. It was unnecessary. It was gratuitous. It was disproportionate. And he did it on purpose.”

The salience of this distinction is immeasurable and is a paramount factor in realizing reform, which would then genuinely realize Black lives in America as meaningful. Passing the George Floyd Act requires collaboration, requiring continued fighting. It is necessary to shift the anti-police narrative to a police reform narrative – a pro-police narrative.

Nonetheless, the breath of life in achieving change is as close to restoration as ever before following the trials’ results. It was echoed by the pouring support around the nation for George Floyd, his family, and every victim and victim’s family of the unjust loss of life of Black men and women by way of law enforcement.

“Today we are able to breathe again,” George Floyd’s brother, Philonise Floyd, said in a press conference shortly after the verdict.