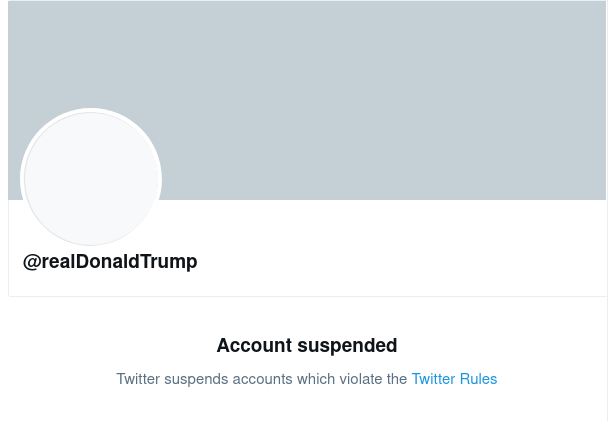 Receipts and sizzling hot “tea” aren’t just metaphors for gossip but the reality of what was President Trump’s digital dossier.

January 9th marks the day that Twitter permanently banned Donald Trump’s official account, @realDonaldTrump. The platform made the decision in order to extinguish the fire of violence that was being globally broadcasted from inside our nation’s Capitol building.

This was in response to two tweets Trump posted to his 88 million followers that were against Twitter guidelines. From calling his supporters “patriots” during the riots to claiming that he will not be attending the presidential inauguration; it only fueled his loyalists to storm and call for an emergency recess during the Congressional proceedings.

It can be argued that President Trump is just taking advantage of the modern technology at his disposal with the public, as presidents before him have.

Trump’s Twitter account holds the same power as the radio did for President Roosevelt during the Great Depression. What became known as “The Fireside Chats,” brought the president into everyday households in order to ease the conflicts of poverty, unemployment, and universal sorrow inevitably from World War II.

Twitter over its fourteen years of existence has aided in multiple forms of political and social movements internationally.

Prior to memes and millennial sub-groups emerging on the platform, the social network rose to popularity in 2009, when actor Aston Kutcher became the first user to reach a million followers; that same year the term, “Twitter Revolution” was born.

The surge for the platform rose during the “Egyptian Revolution of 2011,” in which citizens took to protest police brutality in the heart of Cairo, Tahrir Square. Tweets would release live information for activists and demonstrators that could fill stadiums, in means of coordinating and in times of need. However, distinguishing Twitter as a mere tool jumpstarted its power for others to follow.

The #MeToo Movement entered the Twittersphere in October 2017 when actress Alyssa Milano tweeted, “If all the women who have been sexually harassed or assaulted wrote, ’Me too’ as a status, we might give people a sense of the magnitude of the problem”.

The original credit for the movement goes back to Tarana Burke, a Black woman, a sexual harassment survivor, author, and activist having ownership of the phrase in 2006 on Myspace.

The Black Lives Matter hashtag hit sky-rocketing numbers for a record high of 8.8 million uses and counting from back in May 2020, says Facttank. The platform exploited a bystander video that is now used to mourn the death of George Floyd killed by Minneapolis Police Officers.

Not only was Trump banned on Twitter but after the attempted coup, was held responsible for aiding the spread of conspiracies towards voter fraud. #Stopthesteal and other trendy slogans ultimately caused pro-Trump supporters in large numbers to fight off law enforcement, which leads to killing five people, including one police officer, Brian Sicknick amidst the crowd.

Other platforms that took the riots as enough evidence to put Trump’s influence on permanent hiatus include Youtube, Facebook, Twitch, Shopify, Reddit, Google, and many more.

Ironically Tiktok had also banned certain hashtags, such as #patriotparty supporting the riots as it violates community guidelines. When in fact Trump had great verve back in August 2020, to have the app banned in the states.

Reflecting the time span of the Twitter account itself, Trump was notorious for tweeting a collection of miscellaneous messages. From providing his thoughts on the breakup of Twilight co-stars Kristen Stewart and Robert Pattinson to claims centered on defending his plans during his presidency.

The 222-197 vote announced on January 14th goes down in history as the second impeachment of President Trump. It is alleged Trump had generated plans a week prior to the Capitol raid, hence the full circle to his tweets.

“It’s only the second week and we’ve gone through a failed coup, the Confederate flag in the Capitol and a second impeachment,” said Helen Reyes, a junior from Ithaca College.