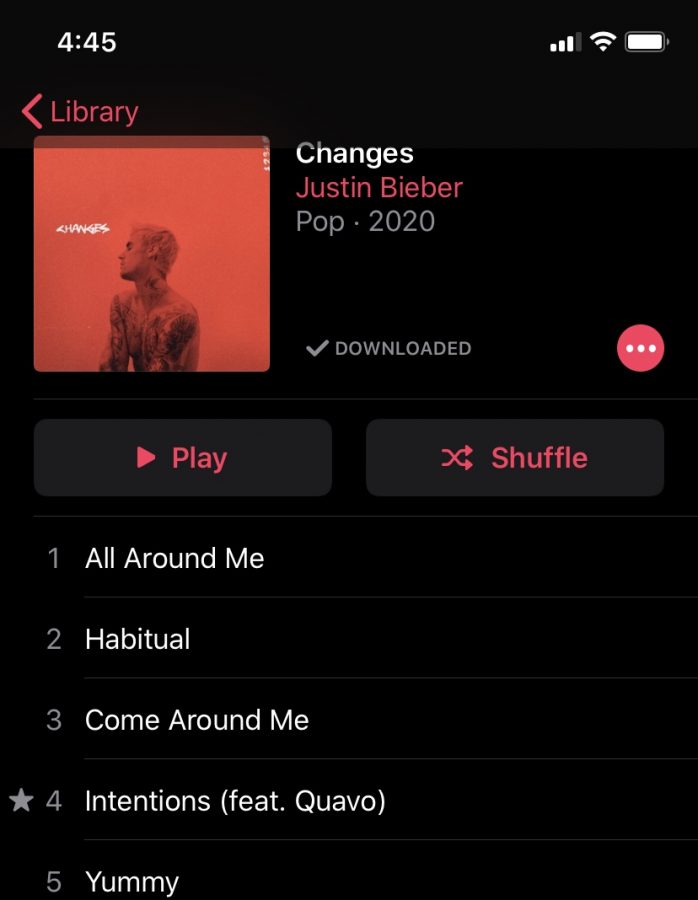 Justin Bieber has never sounded more in love than he does on his fifth studio album, “Changes.” The pop star returns with an R&B album about a love that bloomed while he was on his hiatus from music. Since his time away from the spotlight “Changes,” is more than the end of a rebellious playboy era.

Bieber recorded changes with his trusted writer, Poo Bear and producer and engineer, Josh Gudwin. “Changes” demonstrates that the boy can sing his heart out, and that’s about it. The obvious sappy theme of love and marriage is the strength and downfall of the album. The album lacks variation, by the fifth song you get the message, Bieber loves his wife.

On his first album in four years, Bieber is a wiser married man. Throughout the 16-track album (plus a remix of Yummy), Bieber describes how he found healing through love and faith. It’s no surprise Bieber released his love letter to his wife on Valentine’s Day.

Bieber’s light and tender sweet falsetto are unmistakable. The sensibility on the album is evident, but it doesn’t make up for the lack of musical ambition and weak lyrics. The lead single, “Yummy,” is a mediocre song, and the video leaves you longing for the “Baby” Bieber days. The song opens with the chorus, which states that his wife is yummy all over, over and over again. Tying food and sex is nothing new, but the song is nowhere near steamy or sexy. The video could have been a distraction from poor lyrics but, instead, is also a visual mess.

Perhaps Bieber’s rebranding from bad boy to wife guy is necessary. His sudden marriage to Hailey Baldwin was perplexing to most. However, “Changes” feels like an album for one audience.

Unlike Bieber’s previous albums, “Changes” is focused. He’s now singing to one person instead of millions of screaming girls. The intimacy in his music still remains on some tracks, it’s when that intimacy is broken that the album downfalls. On “Habitual,” Bieber is poetic and lyrical, his voice draws you in. He sings, “Flowers open when they feel the sunlight/Moonrise, tide change, right before our eyes/We’re each other’s vice.” The lyrics provide beautiful imagery on top of Bieber’s airy voice. The song almost seems like it’ll have a beat drop moment, but that moment never comes.

The musical appearances of Kehlani on “Get Me” and Summer Walker on the “Yummy Remix,” elevate “Changes,” to a more soulful feel. “Get Me” gives the album that romantic tension we experience while listening to “Purpose,” while Summer Walker makes the track “Yummy” tolerable.

Unlike his best 2015 album, “Purpose,” “Changes” feels musically one dimensional. Bieber did not attempt to expand or explore his pop sound. The album is rich and textured with R&B hues because of the help of Poo Bear.

The album fails when Bieber gets predictable. Surprisingly his feature songs are weak. When he crosses over to the hip-hop side, Bieber should have left it to Travis Scott on “Second Emotion” and Quavo on “Intentions” and Post Malone on ‘Forever.” The worst verse on the album is on “Running Over,” when Lil Dicky raps, “I got all up on your IG and was scrollin’ down for hours/I got back to 2015, and you started lookin’ young, so I stopped (Ooh)/ Post intercourse when you walk by (Ass, ass, ass)/ More buns than a Shop Rite.” Talk about weak lyrics and a cringy punchline.

The lyrics and beats of the album are fine. The soulful R&B Bieber balances the album, but I wish there was more. This album doesn’t compare to the musical exploration in “Purpose” and the number of hits it left behind. The tracks on “Changes” sound the same, and ultimately the album goes nowhere. “Changes” is far from a dynamic record. Ironically, we don’t even learn anything about his muse, Hailey Bieber. Listening to the Biebs new album feels as if I am reading an entry from my diary in middle school.