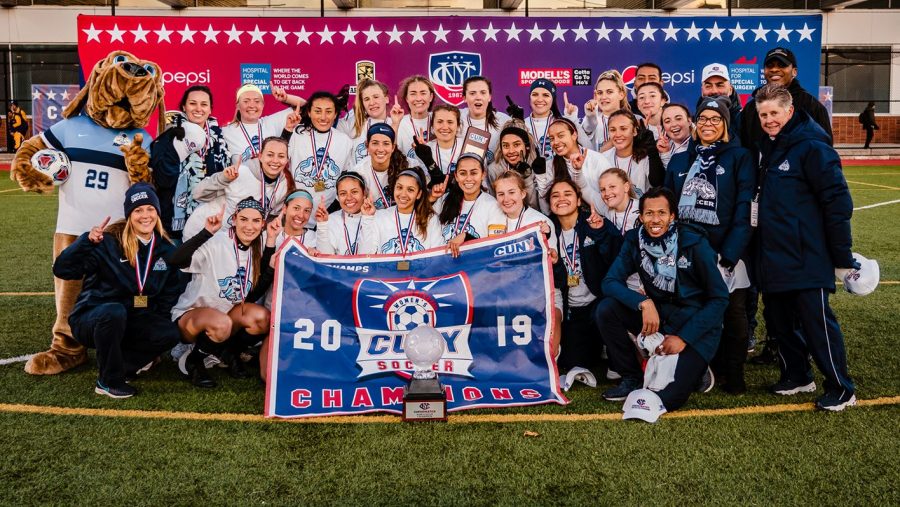 For the first time in the program’s history, the John Jay College Women’s Soccer team are champions.

On November 9th, 2019 the team won the CUNY Athletic Conference Championship against City College with a 2-1 scoreline. The game, which took place at Brooklyn College, marked the end of a successful season for the Bloodhounds.

Not only did the Women’s team become champions, but the Men’s team did so as well. These historic victories earned the Bloodhounds their very first appearance at the NCAA Division III Soccer Tournament.

“It felt great to win because we really worked hard during the season,” said Forward Alexandra Dadario. This past season was Dadario’s first with the team.

Just a few years ago the team was in the opposite position. In 2018, the Bloodhounds ranked 3rd in the CUNY Athletic Conference Women’s Soccer Preseason Coaches’ Poll. The year before that, they ranked 5th out of 7 teams.

“We had to do a lot of recruiting to bring in more depth to the roster and we ended up with lots of experienced players who trained with more intensity and at a higher level,” said Head Coach Casey Sommers.

This past championship season was Sommers’ 6th with the team. She played Division 1 Soccer at Fordham University from 1999 to 2002 and was their Assistant Coach from 2005 to 2014. Sommers has years of coaching experience under her belt, and as a former collegiate soccer player, she is no stranger to pushing boundaries and doing whatever it takes to win.

In November 2018, after winning the Semifinals against City College, the team had finally secured their spot at the Championship, something they had been unable to do since 2011. However, things didn’t go as planned, and they ended up leaving the game with a loss. College of Staten Island, the No. 1 seed, defeated the Bloodhounds 6-2.

“It was something we ended up learning from as it served as a wake-up call that losing was not what we wanted for ourselves in the future,” Sommers said.

The team moved on and focused on making a major comeback next season. In fact, in August 2019, it was announced that the Bloodhounds had emerged as the top choice to win the 2019 CUNYAC Women’s Soccer Championship based on the league’s preseason coaches’ poll. This prediction turned out to be true.

At the final game of the 2019 season, the Women’s Soccer Team had earned the title that they had fought so hard for – CUNYAC Champions.

“It was great to see them win, and when that second goal went in, everyone was screaming,” said Team Manager Chloe Cardinale. “Each team sets a precedent for their year, and this was theirs.”

That second goal was scored with only 90 seconds left by junior Kimberly Robledo with an assist from sophomore Katie Healy.

“Winning took us to the next level,” said Defender Anneliese Tucci. “It really showed us that hard work pays off and that we’ve got the talent.”

Tucci is in her second year with the team and was there when they lost in 2018. “When we lost, it was devastating, so it was a great accomplishment to win,” she said.

The Women’s Soccer Team is now the No. 1 seed in the CUNY Athletic Conference. They will return to action in late August for the regular season.