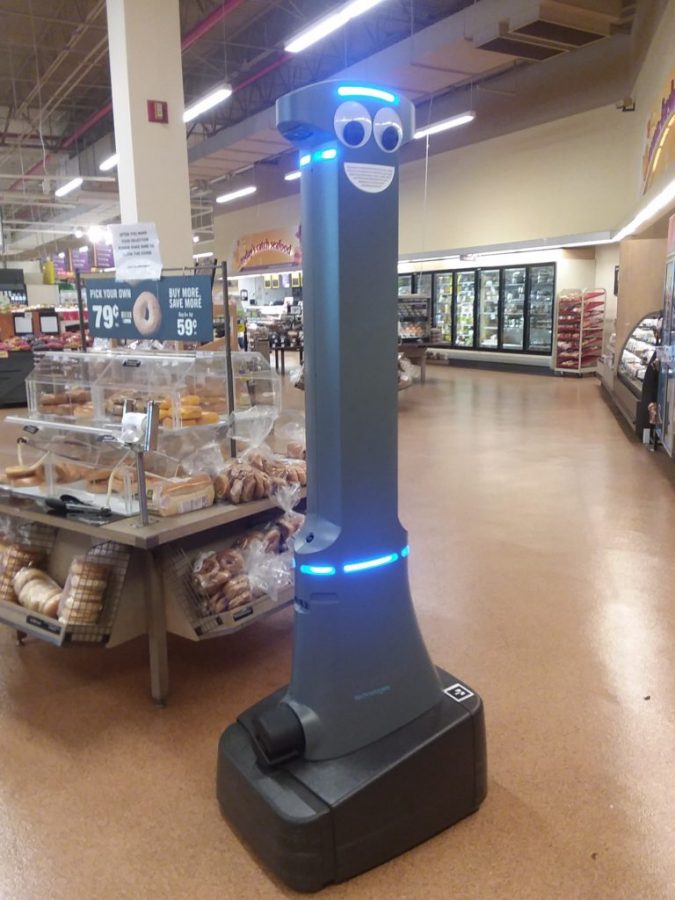 It isn’t the first thing you might see when you enter the Bulls Head Stop & Shop, but in the aisles alongside food, drinks, and toiletries, is a robot patrolling the store for signs of anything out of place.

Anything it might see through its dead eyes, behind which there are cameras, is reported to the store.

After customers enter the second set of doors and are properly in the supermarket, they find themselves in the produce section. The tall, grey machine is often there as well. Its head can be seen over shelves of grapes and berries.

The robot is named Marty. It’s a tall, grey machine with a smiling face. Underneath a brow of blue light lies white paint over a set of cameras, meant to resemble eyes. Beneath those are a white semicircle, to add a smile to the face.

When Marty is around, you can tell. It beeps constantly. The machine has some text on its mouth that you can read if you get close enough, which explains its purpose.

“This store is monitored by Marty for your safety,” it says. “Marty is an autonomous robot that uses image capturing technology to report spills, debris, and other potential hazards to store employees to improve your shopping experience.”

Many do not get this close. Nick Liu, who once almost ran his baby’s stroller into Marty, was unsure what it was doing. “Honestly, I didn’t know the point of the thing,” Liu said.

Collisions are something Stop & Shop have considered in Marty’s design. According to their consumer affairs department, the robot is equipped with a “bumper” system on the front of it and should it bump into an object or a person, it won’t cause any damage or physical harm and Marty will immediately stop.

Another confused shopper was Taevon Hayes, who wasn’t even aware that the machine was able to view anything. “I thought they were cleaning robots,” he said.

Hayes wasn’t even aware the robot had cameras to view its surroundings. Learning that it did was a shock to him.

Some shoppers don’t see Marty as just an innocuous piece of equipment passing through the store, nor do they think it improves their shopping experience. One shopper, Denise Dalfo, feels put off by the machine’s appearance. “You’re waiting for it to grab you,” she said. “When I see it, I go the other way.”

Marty is designed to look somewhat like a cartoon character, probably to make it more amenable to children, but in some ways, this makes it similar to the animatronics that one would find in gimmick restaurants like Chuck E. Cheese.

For some, it’s an interesting addition, but for others, Marty is fuel for nightmares.

He mainly stays in the produce section, away from most customer traffic. He does pass into the other parts of the store. Occasionally, this adds congestion, but Marty never stalks customers. He moves on from places quickly.

When he does see something out of place, he stops. His accents of blue light become yellow and blink. “Caution! Hazard detected,” he says. His voice is feminine. An announcement rings out through the supermarket and says where employees need to go to clean the mess Marty has found.