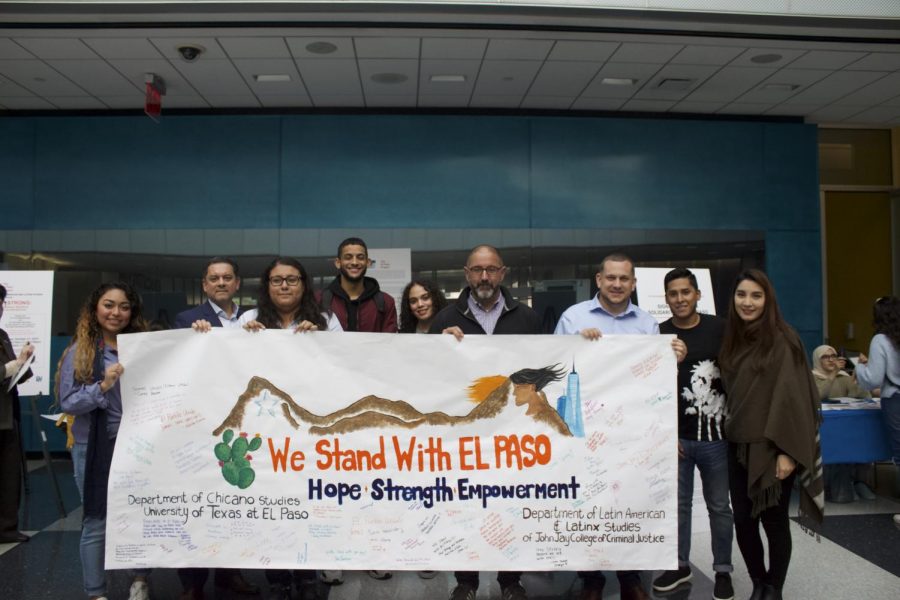 Deep chestnut paint streaked across the canvas of the banner. Thick lines swept up and down across the middle of the banner to create the likeness of mountain peaks. A half-circle of burning orange rose behind the horizon line of the mountain tops like the rising sun.

“We Stand With EL PASO”

With a poster signing to show support for the people of El Paso, Texas, John Jay’s  Department of Latin American & Latinx Studies (LLS) began its “El Paso Project” initiative. The wide banner stood proud in the middle of the atrium as students bustled around it during Community Hour to write their own messages of support.

The “El Paso Project,” will be an ongoing series spread throughout the 2019-2020 John Jay academic year. The project will end with a collaborative effort by students and faculty to establish a syllabus/curriculum on the history of anti-Latinx cases in the U.S. It is to be an ongoing teaching moment for the college.

“We figured that this was an important way of showing solidarity with them,” said José Luis Morín, professor, Chairperson of the LLS Department and one of the organizers of the event. “We felt terrible for the people there.”

On Saturday, August 3rd a white man walked into the parking lot of a Walmart in El Paso, Texas, with an AK-47 style assault rifle. Dressed in dark clothes, he opened fire on the people there before continuing the massacre inside. 22 people were killed and another 24 were injured.

It was later discovered that he targeted individuals of Mexican descent.

Following the events of that day, John Jay’s LLS Department issued an open letter condemning the violence and giving condolences to the Department of Chicano Studies, their sister academic department at the University of Texas at El Paso (UTEP).

“It hit home for us, we have this connection with the university,” said Morín.

The department’s goal is to honor the memory of the lives lost in El Paso, through education and creating an environment where students, “engage actively in efforts to advance justice,” according to the project’s flyer. The project is intentionally named after the shooting, as a way to keep the memory alive.

“The moment that you think enough has been done is the moment we stop progressing as a country,” said Jason Lirano Baez, John Jay student and member of La Voz, a club and newsletter on campus dedicated to promoting issues important to Latinx people in the U.S. He believes strongly that the only way forward is acknowledging problems for what they are.

“Any loss of life is sad, but loss of life due to just pure hatred, is even sadder,” continued Baez, “I remember hearing the news and just thinking…why?”

The sister divisions of UTEP and John Jay have shared a close and ongoing relationship for the past 8 years. The impact of the shooting was distinctly felt for John Jay students in the LLS Department, they have worked alongside the students of the Department of Chicano Studies.

Marian Anaya, a John Jay student, did not have to wait long before finding out that none of her UTEP classmates were hurt. Professor Isabel Marinez, Director of the Unaccompanied Latin American Minor Project (ULAMP), was quick to reassure her students. Still, the relief Anaya felt was overwhelming.

“I was worried, I didn’t know if anything had happened to them. Reaching out to Martinez was really important,” she said.

“It’s important to let [the El Paso community] know that we stand with them,” said Anaya, having signed the poster, “So many students are coming here and signing, I think it’s important to make people aware of what’s going on.”

Estefania Solis, a John Jay student, recalled feeling a great deal of pain when she learned of the shooting.

She explained that she saw the aftermath of the shooting as an example of perseverance.

“It has made the Hispanic community stronger. It gives us a reason to stay fighting,” she said. Though she did not hide her disappointment in the current state of U.S. politics.

“The President did not support the victims and families as he should have,” said Solis. She wasn’t the only one to voice displeasure.

“Our society makes events like this happen,” said Franklin Soriano another student present. He shared his frustration with how American society responds to instances of mass violence.

“We feel indifferent when it first happens, then it becomes national news. We pick and choose what is focused on.” He went on, saying that it is unfortunate that, “something like this has to happen just to get even a blip of notice.”

The “El Paso Project” wants to examine the “long history of hate that has devastated Latinx and other communities in the United States.” Its goal is to break down the events of August 3rd and extract as many lessons from the incident as possible.

The poster, with dozens of signatures and words of encouragement colorfully scattered across its surface from John Jay’s students and guests, has been given as a gift of solidarity to UTEP representatives Thursday, October 31st.

On Wednesday, November 13th during Community Hour in Lecture Hall L2.84, the LLS Department is hosting “Teach-In On Anti-Latinx Hate in the U.S., an open forum to share experiences. Alondra Aca, a John Jay student majoring in LLS will be the featured speaker.