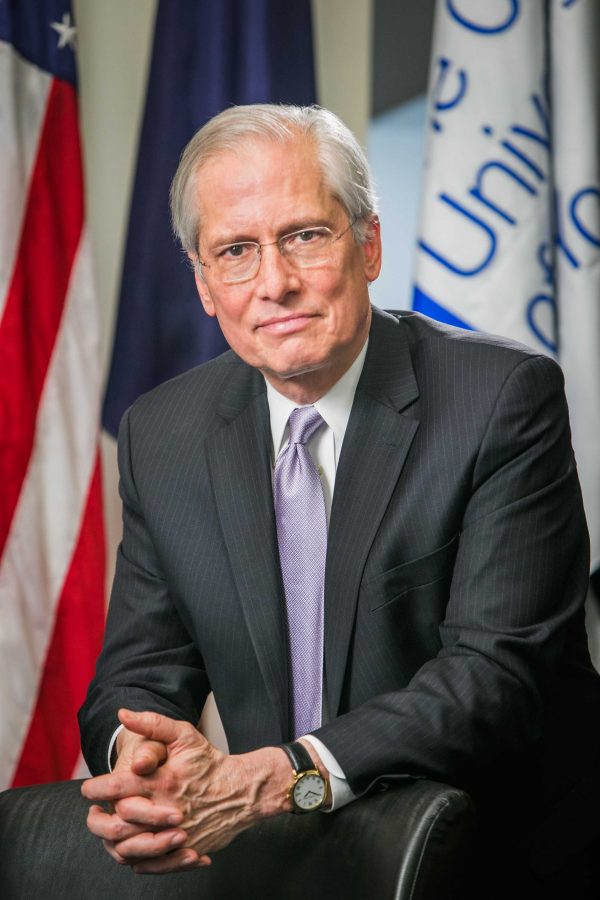 A year from now John Jay College will have a new President. The national quest for a leader has begun.

On October 25 Jeremy Travis, president of John Jay College sent an email to all faculty and students announcing his resignation, effective August 1, 2017, and his new position as Senior Fellow at the Program in Criminal Justice at the Kennedy School of Government at Harvard University.

In his email to the college, President Travis said, “I will leave the presidency at John Jay with a deep sense of satisfaction.  Working closely with gifted colleagues and an extraordinary college community, and with the indispensable support of the University, we have transformed John Jay.”

Jeremy Travis was selected to serve as President of John Jay in 2004; many of his colleagues have been working with him since the first day of his presidency.

“I’m saddened to hear that Travis is leaving,” said Rulisa Galloway-Perry, Chief of Staff, Office of the President. “I’ve been working with him for the entire time he’s been with us. It’s quite shocking, but also understandable, due to the time he’s given to the college and what he’s done for the college, I think all the faculty is saddened, but we all understand.”

John Jay has had a revolutionary shift under the leadership of Jeremy Travis. While serving as John Jay’s president, Travis managed to turn the college into a senior college that offers a rigorous undergraduate liberal arts program, and in 2012 he merged the college with the esteemed Macaulay Honors College of CUNY.

Galloway-Perry said that, “Travis is a dedicated member of the John Jay community. He is a great leader; his leadership style is so unique. Travis was able to bring the college to a different place in its history, for that we are definitely grateful,”

President Travis founded the Presidential Internship for juniors and senior, so that he can continue to guide students and instill a strong foundation of leadership skills within them. The presidential interns work directly with Travis as they participate in and contribute to projects of interest to the President and the college.

“It was a real shock to the other two interns and me,” former presidential intern, Lauren Giles said. “We think Travis represents the school and he has brought it to what it is now, so it’s a little sad and hard to believe that he is leaving. Seeing him leave was difficult in a way, but great because it’s an astounding opportunity for him.”

During Travis’ time as president, the freshman admissions has increased by half, the amount of full-time workers raised by a third and outside financing for faculty research has tripled, according to the John Jay website. Also John Jay Online was started in 2014 and finished its first primary campaign for $50 million during that year.

John Jay Online is an website that can be accessed from anywhere in the world, allowing individuals and access professional development programs from this institution.

In an interview, President Travis said, “I love John Jay students. These students are a unique group of young people. They are individuals that want to change the world; they show great interest in social justice and the workings of the justice system. They come here with great ambition and motivation.”

According to a statement by CUNY Chancellor James Milliken, Travis made the veterans opportunity development a top priority. Roughly 600 veterans attend the college, which places John Jay in the nation’s top rank for schooling veterans, according to the Best Colleges for Veterans ranking list.

“Brilliant, genuine, caring, and involved are words I would use to describe Travis.”  Giles said.

John Jay College has the most diverse student body among CUNY’s senior colleges. The student body is made up of 39% Hispanic, 28% White, 21% Black and 12% Asian. 47% of the students are the first generation in their families to attend college and 50% of them speak a language other than English at home.

“The diversity among us is phenomenal, I love walking around our campus largely because of the diversity,” Travis said. “I’ve seen it, as part of my job to create communities of support at John Jay for whom that support is important too. Years ago there was no special support structure for LGBT students, the Muslim Association, Veterans Association and Urban Male Initiative. These are now emplaced. My role in all of this is to encourage the students to organize. As president it was my obligation to help faculty create these structures so students feel supported when they come here.”

This year alone, faculty secured 25 million dollars for research funding; this became a new record that put John Jay fourth with CUNY. Under President Travis’ leadership the faculty was able to create new majors because of the finances.

In his email, Chancellor Milliken noted that “Jeremy has been a close and invaluable colleague to me during my first years at CUNY, providing wise counsel on many university-wide issues, always answering the call to step up and lead important CUNY initiatives, and serving as a generous partner to his colleague presidents and the community.”

According to President Jeremy Travis the future of John Jay is headed in the right path. The number of students enrolled in summer and winter sessions has increased and John Jay Online is predicted to extend globally.

“Every time I step onto the John Jay campus I feel encouraged about the future and it’s because of our students!” Travis said.

The Presidential search be done by inter CUNY team, including the John Jay English Department’s very own Professor Karen Kaplowitz.

“There will be a group of students who will meet with each presidential finalist and give the search committee feed back on each of them.” Kaplowitz, said.